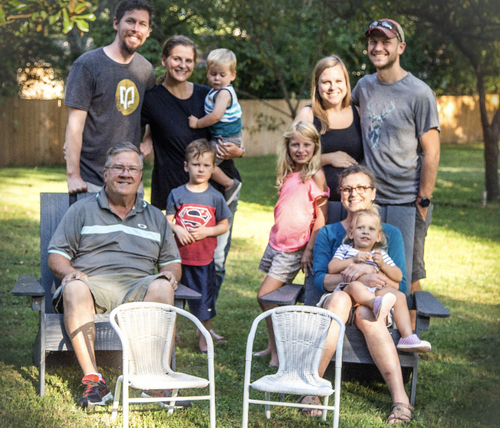 Dale and Mary Beth met at Georgia Baptist Hospital in Atlanta, Georgia in 1983. Dale was pursuing a Doctor of Pharmacy degree at Mercer University while Mary Beth was a recent nursing graduate from Georgia Baptist School of Nursing. Their first few years of marriage took them from the Southeast to the East Coast to the Midwest, and eventually back to the Southeast,and “home” in Knoxville.

“Home” because Dale was born in Loudon, Tennessee, spent his high school years in Chattanooga and attended Carson-Newman College (now University). Mary Beth, though born in Indiana, spent many of her childhood years in the Halls community of Knoxville. They both were blessed to be raised in Christian homes and to attend church their whole lives. Dale realized following a high school mission trip that God had a plan and purpose for his life. Both Dale and Mary Beth have a passionfor the needy and the lost and desire to be on mission with God.

Because of God’s plan, He did not leave this family in Knoxville for good, as in 2001, He literally took them and their two daughters (Stephanie, age 13 and Michelle, age 10) to the ends of the world to work as IMB medical missionaries and church planters among an indigenous people group in Chile and Argentina. While overseas, Dale completed several courses from Southern Baptist Theological Seminary in New Testament, Missiology and Church Planting. They left the IMB in 2006 in order to care for aging parents during which time they resumed their medical practices here in Knoxville.

Dale and Mary Beth have been married for 36 years and today their daughters are grown and married and the Hooker’s havefive grandchildren with another due in April. Upon retiring from pharmacy practice, Dale and Mary Beth relocated from Farragut to Fountain City. Mary Beth continues in her nursing at UT Medical. While Dale questioned the decision to relocate to North Knoxville in the beginning, he now sees that God orchestrated this decision and is instrumental in their involvement with Village Church. Mary Beth has been involved with volunteer ministry opportunities in the Norwood Community in past years and as a result, they both are looking forward to ministering to this multi-ethnic population and seeing God work in making, growing and sending disciples of Jesus Christ throughout our Jerusalem, Judea, Samaria, and the ends of the world.

Dale was an elder from January 2021 to December of 2022. He has served faithfully and we are so thankful for him and Mary Beth. Dale and Mary Beth are still members at Village Church.